Ahh, the challenge of finding good music to use in a video. To anybody that’s ever needed high quality music to use for video projects (whether they’re your own projects or projects for a client), this is a familiar struggle. Up until relatively recently there were four basic options to find music for videos:

Option 1: Use popular song that you don’t have the permission to use (and risk getting it taken down from places like YouTube, or getting sued)

Option 2: Use “free” Creative Commons music (which is often poor quality, of limited selection, hard to find or has lyrics making it not suitable for use as a video soundtrack)

Option 3: Buy stock music tracks one by one from various royalty free music sales websites (which can get expensive fast)

Option 4: Hire a composer to write custom music for your film or video (which can get really expensive and often overkill for a small video or client project)

I’ve done all three of those approaches in the past, so I know how much they all tend to suck in their own ways. But recently I heard about a new option that seemed too good to be true at first. Imagine a website with thousands of songs that don’t contain lyrics that you can download and use in any type of project forever by just paying a reasonable annual fee. Sort of like a royalty free stock music all you can eat buffet. Could such a service exist?

Enter Storyblocks Audio, a website with production music, sound effects and audio loops that offers a huge selection of high quality downloadable audio for your video editing. I decided to sign up for an account on Storyblocks Audio to see if it was really as good a deal as it claimed to be. Here’s my Storyblocks Audio review. At the end of this article I’ll give you a special link which you can use if you decide to sign up for a subscription. (I may receive a commission if you choose to sign up.)

How good is the Storyblocks Audio Selection? 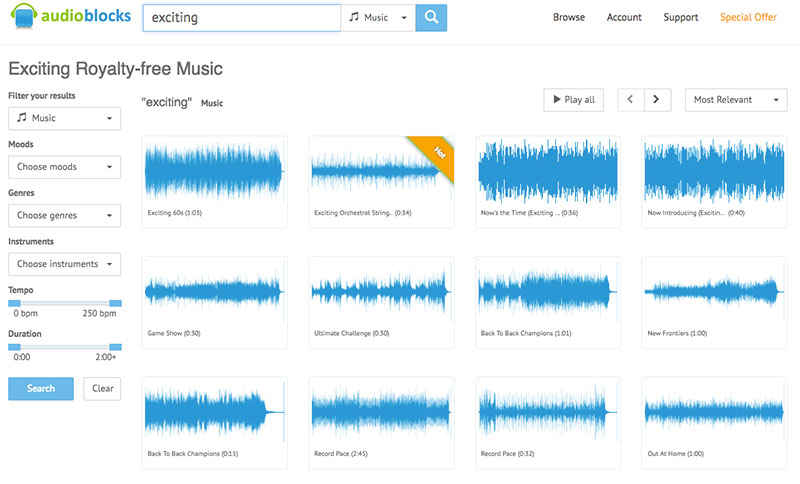 I’ve found that Storyblocks Audio has a pretty decent selection both of sound effects and royalty free production music. Their search is decent and and includes sorting options like mood (aggressive, epic/inspiring, happy/upbeat, playful/silly, relaxing, sad, sentimental or suspenseful), as well as music genre. The music genres are split into the following categories for music:

Similarly, audio loops like drums or sound effects are organized into their own genres as well. I’ve been quite satisfied with their selection and haven’t needed to use other audio services ever since I signed up for an account with them, using a promo code (I’ll give that code at the end of this article) and haven’t looked back since. I’ve used their music in a documentary I’m working on as well as several short videos for clients. Everything has been quite well received.

How good is the Storyblocks Audio User Interface?

There are several things that I like about the Storyblocks Audio interface. First, each music track is available as both an instant MP3 download or a WAV download which is helpful because some editing software requires WAV files. Their music results pages also can be navigated using your keyboard’s arrow keys (previous/next) which is especially handy if you’re going through dozens of tracks to find the perfect one. I also like the ability to narrow down a search to sort by instrument set (show only results with an orchestra, guitar, etc).

What type of projects can I use Storyblocks Audio music in?

According to their site’s official FAQ, they say:

Our content may be used for nearly any project, commercial or otherwise, including feature films, broadcast, commercial, industrial, educational video, print projects, multimedia, games, and the internet, so long as substantial value is added to the content. (For example, incorporating a video clip into a commercial qualifies, while reposting our video clip on YouTube with no modification or incorporation does not.) Once you download a file it is yours to keep and use forever, royalty-free, even if you change your subscription or cancel your account.

Sounds pretty good, huh? I can’t think of a better terms of use for royalty free music myself. They also know that sometimes songs can incorrectly get flagged for copyright infringement on YouTube so they have a special support form for accidental YouTube copyright claims fixed (something I’ve not seen any other stock music site offer, and I’ve used several).

Is Storyblocks Audio worth it? Value for the money

When compared with free music: Earlier on in my career I tried to use a lot of free music in the videos I would edit. Although I love the idea of Creative Commons music licensing (a permissive alternative to copyright that is gaining popularity slowly), some CC licenses require you to release your finished video with the same license type as the music you use. Meaning that if they release their music for free and allow you to re-use it and you use it in your film, you have to then release your film for free and allow people to re-use your finished work as well. For some types of projects, particularly client work or anything you want to eventually sell, this is a bit of a poison pill that can taint the entire project.

When compared with traditional royalty free stock music: After more than a year of using Storyblocks Audio and having used traditional music licensing sites for years before that, I can safely say that Storyblocks Audio has paid for itself many, many times over in just the first few months I was using it. The ability to audition tons of temp songs without making clients suffer through listening to music with audio watermarks (cough cough, Pond5) alone is worth it.

Royalty free music tracks can cost anywhere from $5 up to several hundred in my experience and Storyblocks Audio offers an all you can eat buffet of high quality tracks without words. In a recent project that I edited for a nonprofit organization client with a low budget I used more than 10 different audio tracks (it was a series of videos each with a few different music cues). If I had used a traditional stock music licensing website where you have to pay for each track that you used, we wouldn’t have been able to afford nearly that much music, and the video quality would have ultimately suffered as a result. The freedom to throw in an additional music cue here or there to mix things up in an edit without having to worry about budget is amazing.

The bottom line for me is that Storyblocks Audio has simplified my editing workflow, made me more efficient and most importantly saved me tons of money licensing music, while allowing me to be more creative with my editing choices without having to worry about budget. As a video editor I would without hesitation recommend subscribing to Storyblocks Audio for a year.