How to use notecards for story outlines (documentary filmmaking tips)

Documentary filmmakers and all sorts of other types of storytellers often encounter a problem: starting a story is often easy, but plotting out an entire narrative arc that works well can be harder. This problem is especially hard in documentary filmmaking because you as the filmmaker often have several pieces that you know you want to have in the film (great stories or moments) but it can be hard to establish the right order for scenes or ideas to be introduced to the audience. That’s where notecards come in handy. The tips in this article are intended for people making documentary films, but they also apply to other types of storytelling too. Let’s get started!

How to use notecards for story plotting

First, you’re going to need to figure out what your possible story beats are. For documentary films this might be scenes (if you’re following a particular set of characters like in a cinema verite film). Or in an issue-based film, your beats might be more along the lines of “the spot where we introduce this idea or argument.” For historical documentaries, a beat might be telling a specific part of the story, or moment.

Next, write those beats down (each on a separate notecard). Use shorthand if you need to, like “the locker room prep scene before the race,” “packing montage,” “motion graphics segment explaining Sally’s round-the-world travel route” or “Interview – Joane tells the story about finding out who her real father was.” Another notecard might be for “end credits sequence.”

Tip: For some types of films you might want to notecards of different colors to denote different types of scenes. For instance, a blue index card might signify an interview, a white notecard might be for verite scenes, etc. Browse colored notecards on Amazon.

Next, try putting them in an order that makes sense. You might be doing this on a large empty table or you might have a big cork board with pins or on a wall with masking tape. In a way, this is almost like a re-order-able documentary paper edit.

Why notecards can be especially useful for story plotting

Now that you have your notecards written out, you can step back and read them in the order you’ve laid them out in. Do you see any possible problems with what you’ve got? Can your story do without a card or two– meaning you might be able to eliminate certain material you had earlier thought was crucial? Shorter and tighter storytelling is usually better.

The key part of using index cards or notecards for story outlines is that you can easily re-organize the story order and experiment with different orders. Using notecards allows you to conceptualize the order of exposition in your story in a way that’s much easier to capture rather than having it all in your head. Getting it down on paper may help you see problems like missing elements or better possible sequences.

As you edit your story and experiment with re-ordering scenes, you can refer to and re-order your notecards. One way to “back-up” your old note card configurations is to take a photo of their order and save it (make sure your handwriting is large enough to be legible!).

Notecards can also be useful when you’re considering a dramatic re-order of the story and want to think it through before you spend all the time and effort before you open up your editing program.

When should you use notecards for story plot work?

You can use them at any stage of the process, from pre-production and research right up through editing. Some filmmakers will use notecards part-way through filming and use a certain color card to denote material they haven’t shot yet but anticipate gathering before they finish shooting.

Do you have to use index cards specifically?

No! Here are some alternatives to using notecards: In the writers rooms of television shows, writing teams will often use a white board to plot ideas and beats out with so they’re large enough for everyone in the room to see. Some storytellers use sticky notes to experiment with story beat order instead of index cards. 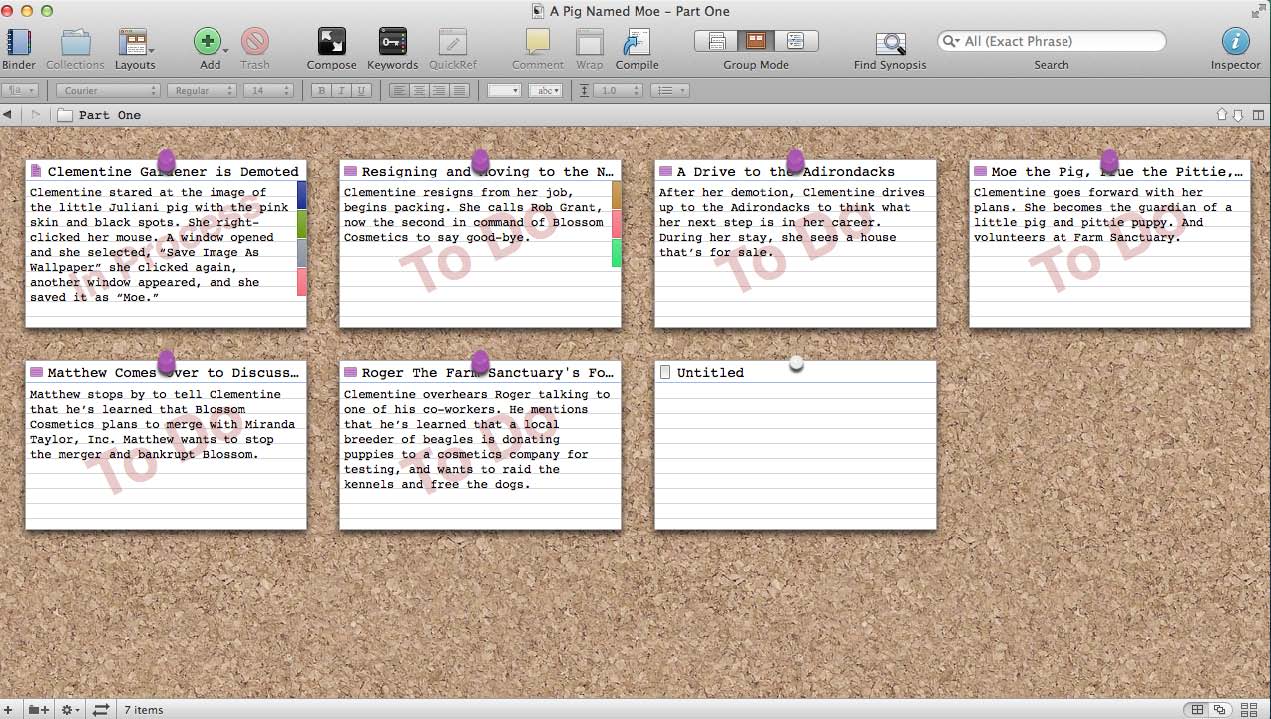 If you prefer to work on a computer, you might consider using a program like Scrivener (available for Mac, PC, and iOS mobile devices) which allows you to simulate a digital corkboard. Additionally you can write a script in various formats in Scrivener too. You can check out Scrivener’s features below: