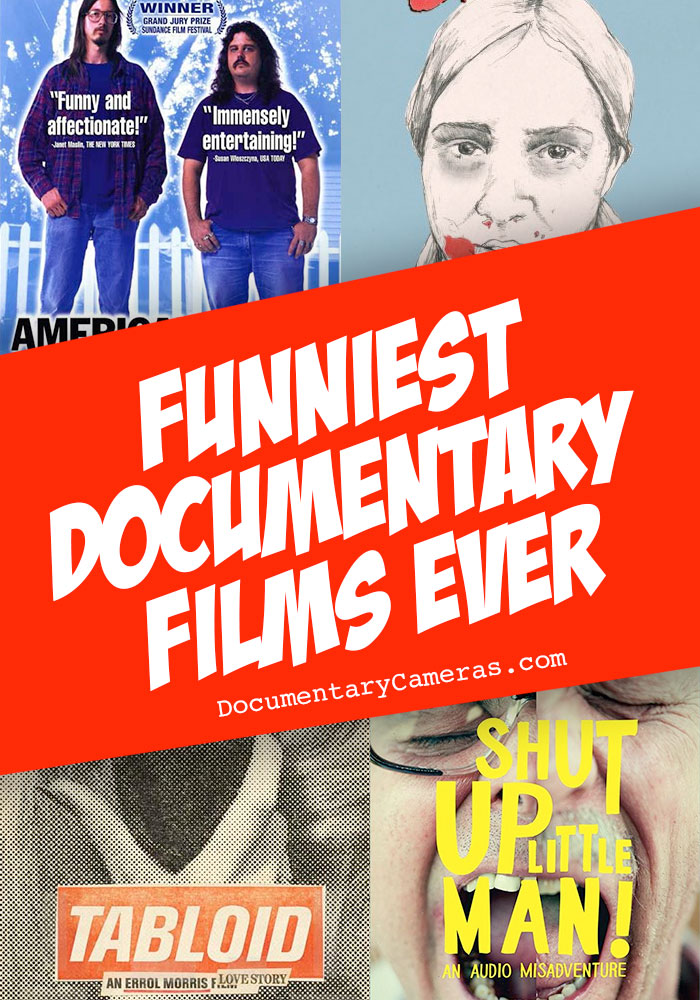 Think documentary films are always boring and serious? Think again! Documentaries can be just as funny, and sometimes funnier than fictional films. This list proves it! Here are ten of the all time funniest documentary films:

, avowed atheist comedian Bill Maher takes on what he sees as a scourge on the modern world: organized religion. Whether you agree with him or not, Maher makes for a funny host as he explores various issues in this documentary. Known for his astute analytical skills, irreverent wit and commitment to never pulling a punch, Maher brings his characteristic honesty and skepticism to an unusual religious journey.

9. Where in the World Is Osama Bin Laden?

Before he was found hiding in plain site, Osama bin Laden was the world’s most wanted terrorist. In this funny documentary, Morgan Spurlock (the man behind Super Size Me) trained his sights on finding the terrorist mastermind. And although bin Laden was found and killed, the documentary is still relevant today as we rethink America’s relations with the Muslim world.

This one isn’t so much laugh out loud funny as it is cute-funny. But you’ll laugh too. Here’s the film’s official synopsis: Emily Hagins is making a zombie movie. It’s feature-length, it’s bloody, and the zombies don’t run. Just like it should be. But there’s just one difference between her film and every other zombie movie you’ve ever seen. Emily is twelve.

7. Exit Through the Gift Shop

Ah, what to say about this one… With one part humor, one part mystery, one part unbelievability, the filmmaker’s craft quite a tale exploring Banksy’s impact on pop culture and street art, and his fans and imitators. It tells the story of how an eccentric French shopkeeper and amateur filmmaker attempted to locate and befriend Banksy, only to have the artist turn the camera back on its owner with spectacular results.

I defy you to watch this film and not laugh. The trailer explains the premise pretty well, but basically when two friends tape record their violently noisy neighbors, they accidentally create one of the first ‘viral’ pop-culture sensations. Blurring the lines between art and exploitation, Shut Up Little Man is a darkly comic modern fable. The documentary explores the roots of the audiotapes and even tries to hunt down the original people shouting to figure out why they were so mad.

Now here’s a real gem. In the 1990s, a VHS tape was passed around from person to person starring “Winnebago man,” the world’s worst camper salesman. The footage was made up of outtakes from an infomercial video but in this film the producers track down the actual star of the film, Jack Rebney, an unlikely folk hero whose outrageously funny outbursts were caught on tape. The outtakes reel mysteriously circulated on dubbed VHS tapes for years before turning into a full-blown Internet phenomenon on YouTube in 2005. Today, the “Winnebago Man” has been seen by more than 20 million people worldwide and is regarded as one of the first and funniest viral videos.

How funny is a documentary staring tons of comedians all telling their own version of the same joke? Very funny. And if you thought hearing the same joke told over and over again might get old– you’ll be surprised that it doesn’t. At least, not when it’s told by people like George Carlin, Whoopi Goldberg, Drew Carey to Gilbert Gottfried, Bob Saget, Paul Reiser and Sarah Silverman. The Aristocrats

is quite, quite funny and definitely worth a watch. This documentary may not have the highest production values, but boy does it make up for it in comedic value.

Some folks think Michael Moore’s documentaries are hit or miss, but this one is definitely a hit. In Bowling For Columbine

, Moore explores gun violence in America in a way only he can. One part comedy, one part tragedy, this documentary definitely belongs on any top ten list of funny documentaries. Mixing riveting footage, hilarious animation and candid interviews with everyone from the NRA’s Charlton Heston to shock-rocker Marilyn Manson, Bowling for Columbine is a brilliant tour de force in documentary filmmaking.

is a case study in how editing can make a series of what might otherwise be boring interviews hilarious. In the late 1970s, Miss Wyoming Joyce McKinney became a tabloid staple when she kidnapped her former beau, a Mormon missionary named Kirk Anderson, and tied him to a bed to deprogram his religious beliefs by having nonstop sex with him. Morris (also known for his films The Fog of War, and The Thin Blue Line) follows the odd and kinky adventures of this beauty queen with an IQ of 168 whose single-minded devotion to the man of her dreams led her across the globe, into jail and onto the front page. Funny, strange and disturbing, Tabloid is a vivid portrait of obsession, delusion and scandal sheet notoriety. It easily earns its place on this list of funny documentary films.

, the filmmakers follow hapless filmmaker Mark Borchardt as he struggles to complete his horror film, “Northwestern.” Through a series of hilarious and mind-boggling attempts to complete the film, we gain a view into the inner workings (or not workings) of a truly indie filmmaker. Released in 1999, American Movie took home the Grand Jury Prize at the Sundance Film Festival and there’s no question it deserved it.

Why do we love funny documentaries? It may be because real life is weirder than fiction and sometimes real life is funnier too if only because as viewers we’re tempted to think “oh my god, this is actually happening!” The humor in these films often comes from the unexpected. Whether they’re discoveries of all kinds, funny narration and juxtapositions, people tripping over themselves on their way to accomplish something, or just the sheer silliness of a situation, these films are quite funny indeed. Another reason why these are humorous documentary films is that oftentimes we expect nonfiction to be serious or boring and so when a doc is funny it can surprise us in a uniquely tickling way.