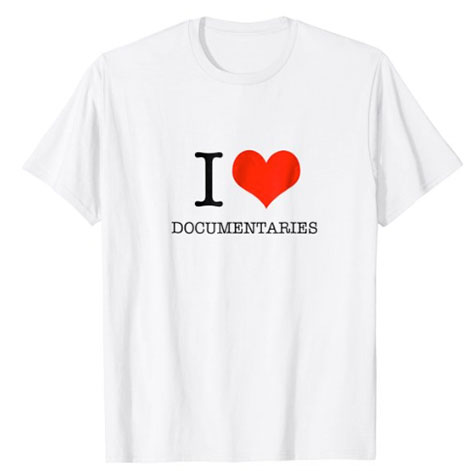 This shirt reads “I love documentaries” except the word “love” has been replaced with a heart, reminiscent of the iconic “I Heart NY” tourism shirts that everyone recognizes.

This is a great indie filmmaker shirt as well as a T-shirt for people who love watching doc films. Documentary film fans unite! This documentary film shirt is available in both men’s and women’s sizes in the color white only.

Here’s another great documentary film shirt for filmmakers, people who love documentaries, or general fans of nonfiction. It reads “(non)fiction” in a simple typewriter font style. This is also a great shirt for journalists or reporters because it isn’t film specific.

Broadcast your love of nonfiction content to the world with this nonfiction t-shirt. Makes a great gift as well. Available in men’s and women’s fits. 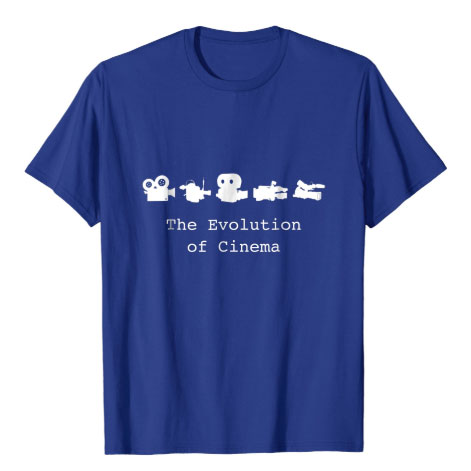 The Evolution of Cinema Film Shirt

From the days of old-fashioned cinema cameras through the present day of digital cinematography, filmmaking technology has changed quite a bit. This t-shirt pays homage to the filmmakers and cameras of yore through the present day. It features an image of an old cinema camera, a Bolex, a Panavision film camera, an ENG style video camera and a more modern video camera presented in an “evolution of man” style progression. Camera technology has changed a lot and this film shirt tracks the progress from the early 20th century up to the present day in five stages, each representing a different decade in Hollywood and the film/movie/television industry. This is a great shirt for filmmakers or fans of the history of cinema in general. It’s also a great film student shirt. This film shirt comes in black, blue, navy, red, and gray (men’s and women’s sizes available).

This is How we B-Roll T-shirt

This funny documentary t-shirt is for those filmmakers and editors who know the importance of picking the right b-roll. To the casual viewer, b-roll footage is just filler, but creators know how it can enhance a documentary and express a unique style.

This t-shirt declares “This is how we b-roll” with a variety of film and movie cameras from the history of cinema. Available in men’s, women’s, and youth sizes in black, navy, asphalt, royal blue, and brown. 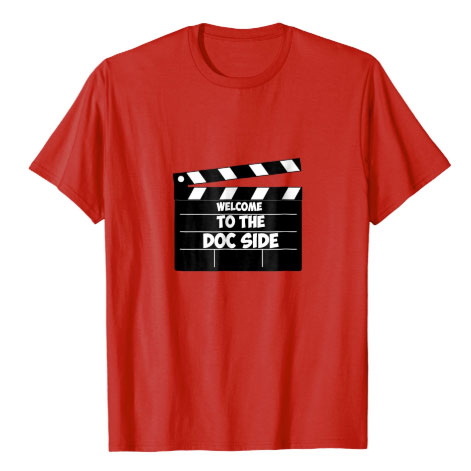 Welcome to the Doc Side Documentary Filmmaker T-Shirt

This is the shirt for those film students who dream of getting behind the camera and making their own blockbuster film. Whether they’re in college or university, this shirt proclaims what their focus of study is: Film School.

This is the shirt to wear to class or while producing their first short film. It makes a great gift for aspiring young filmmakers of all genres, including those who love documentaries.

Rock Out With Your Doc Out – Documentary Film Shirt

Share This Article:
2018-06-05
Previous Post: The Best Mountable Professional Action Cameras & GoPros for Filmmakers
Next Post: How to license TV news footage for a documentary: How much does TV news footage cost to license?