The process of making a documentary film is particularly complex. It’s a combination of filmmaking and storytelling on the one hand, combined with logistics and producing and budget concerns on another hand, and legal permissions issues on the third hand. In this article, we’re going to run down some of the most common pitfalls of first-time documentary filmmakers and outline how you can avoid making these mistakes. Let’s get started!

Mistakes can happen at just about any step in the filmmaking process. Some of these mistakes are big and some are small, but all of them can be avoided if you are careful.

Depending on what type of distribution you eventually get for your documentary, you’ll probably need signed release forms from all the people who play meaningful roles in the film. Download and print a stack of release forms for documentary filmmaking before you even start shooting and you’ll be covered. Even if you think you’ll just wind up putting a short documentary on YouTube, it’s still a good idea to get release forms signed (partially to protect yourself and partially because you might wind up with an exciting distribution opportunity later on that requires them).

Picture this: You’re in the editing suite, possibly paying an editor thousands of dollars a week (or even editing yourself) and you realize you don’t have enough b-roll to cover the cuts you’ve made within an interview. This is a common dilemma and can be avoided beforehand if you plan ahead and brainstorm creative b-roll ideas to capture on location.

If it’s too late to shoot more footage and you’re deep in post-production, you might be able to use archival still photographs or archival footage or stock footage instead of original b-roll. Depending on what you need, licensing it could be expensive however and finding it may be difficult. The best possible solution is to plan properly to shoot more b-roll than you think you’ll ever need– it might just barely be enough!

Mistake #3: Not planning early for how you’ll eventually distribute the film

Distribution is one of the most challenging phases for filmmakers who would often rather be making films than distributing the one they just finished. But planning ahead, ideally in the pre-production phase, can reduce some distribution headaches. Having a distribution plan in mind for your film may give you guidelines for how to make choices about things like:

Even experienced documentarians sometimes make this mistake. It’s always useful to get a wide variety of still photographs while you’re making your film, that’s why major Hollywood movies even have still photographers on set to take pictures of both behind the scenes snapshots of the director and crew but also stills of the actors doing key moments in the film. Both types of photos are extremely useful for marketing documentaries later too.

Yes, it’s true that you can pull still frames from your video but they won’t be as crisp and high resolution as photographs taken by a proper DSLR. A failure in foresight to collect enough imagery on location often leads to a scramble in post-production to figure out what to use as key art for the project. Take lots of photos on set! Even if this means just handing a DSLR to a crew member to take a few snapshots. Make sure you also get a few photos of yourself on set (both you with a camera and also headshots) because you’ll find uses for them later too.

Mistake #5: Not building an audience while you make the documentary

From the start of your documentary filmmaking process to the end you’ll probably come into contact with hundreds or even thousands of people who are interested in what you’re doing. Each time you leave them behind without getting their contact information to add to your mailing list is a mistake. Your release forms should collect people’s email addresses too. Marketing your film doesn’t start when it’s finished– it starts when it begins!

Start a free email mailing list with a great free service like MailChimp to organize your list and send emails to them for fundraising or to offer them a chance to buy the film when it’s finished.

Mistake #6: Asking for the wrong amount in a crowd-funding campaign

If you’re doing a Kickstarter or other crowd-funding campaign, asking for too little money could get your project funded fast but eliminate the urgency of meeting the goal so other people won’t donate to it. On the other hand, asking for too much money (or a round number that can seem arbitrary like exactly $10,000) can mean you don’t reach your goal. Be realistic– both about how much you want to raise and also how much you and your social circle can raise.

Mistake #7: Not getting enough feedback on your rough cut

Locking your film at picture lock before you’ve gotten enough feedback can result in a weaker documentary. If viewers are left scratching their head struggling to understand a concept in your film or if the ending is unclear or the beginning is boring, you haven’t done your job collecting as much feedback as you needed. We recommend getting feedback from a variety of people including A) subject matter experts who know about what your film is about, B) other filmmakers and storytellers, and C) general audience members.

Mistake #8: Not getting clean interview soundbites

Inexperienced documentary producers and interviewers can fail to get clean soundbites from their interviewees by interrupting them or forgetting to get a version of the answer in a complete sentence. Later on, in the editing suite, you may realize that the answers from your interviewees are missing key context that would make them a complete standalone sentence (“Yeah, he was” rather than “I tried to my uncle up and realized that he was dead”). If your voice as the interviewer isn’t going to be heard in the finished film, your interviewee’s statements need to stand alone without a questioner adding context.

For more on this, read our companion article: Documentary Film Interview Technique: Should the Questions be Heard on Screen?

Mistake #9: Including too much text on screen

A documentary should above all else be a movie, not a magazine article. If you find yourself putting a lot of text on screen it can slow the film down quite a bit and lose your audience. Look for creative ways to get your point across, either through a narrator or getting the people who appear in your film to explain things. Don’t make your audience read too much or do too much math either. They’re there to watch a movie!

Mistake #10: Not starting the film off with a good enough “hook”

Film festival programmers are usually inundated with films from all over the country or even the world. They have to choose a small number of the films submitted– perhaps 1%– to show at that year’s fest. If your film doesn’t start with a bang, it may get tossed aside before a fest volunteer even finishes the first ten minutes. Give the film a sense of urgency and momentum and intrigue at the beginning and you’ll have a much better chance of being selected for film festivals. 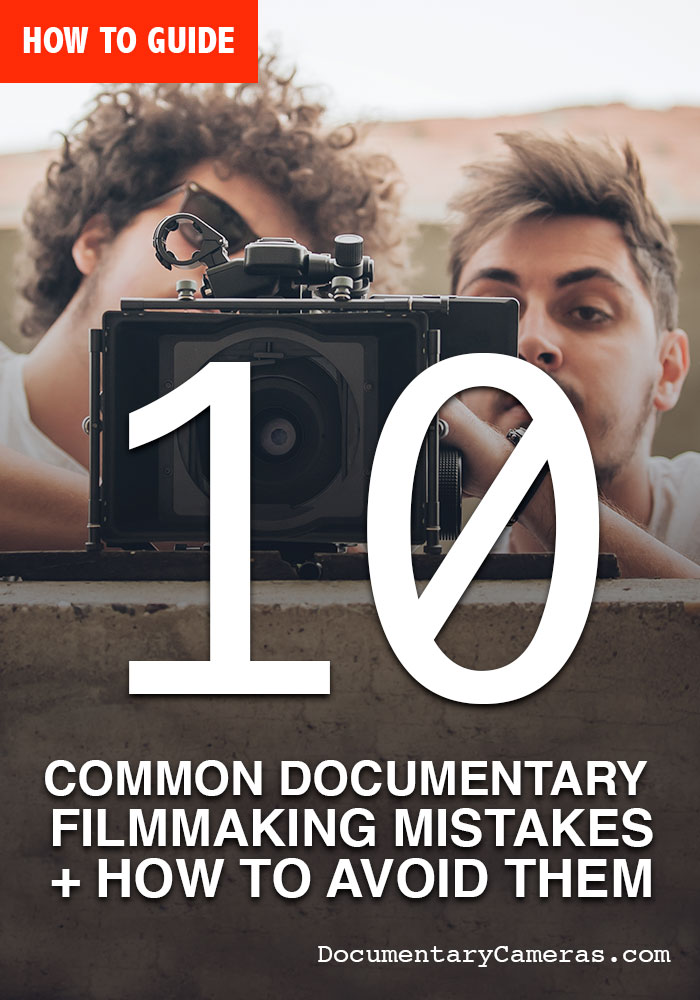 Related:
How to write a script for a documentary film

How to boost film production values

What are the steps to make a documentary film? How to make documentaries